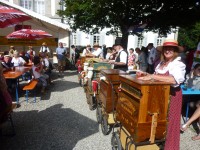 For the 13th international organ festival at Einsiedeln we travelled to Switzerland on 12th August 2017.

Our friend Peter X. Bürgisser (www.drehorgel-schweiz.ch) had again invited some 30 organ grinders way before the festival. After the morning coffee at hotel "Drei Könige" Peter asked the grinders to get together into groups and decide where to play. Under blue skies the groups of grinders afterwards spread out to places all over the town and under best weather conditions grinding started on 10:00 h.

The traditional service in the monastery´s church "Maria Assumption" at 11:00 h was accompanied by three organs and their players, namely Peter Bürgisser, Cyril Schulthess with their Raffin-instruments and Martin Zumbach with his self-built barrel-organ "Violinopan", an instrument of high class and precision-built in the traditonal way. Martin for sure is one of the last persons in Europe to make barrels for organs.

After the service, which was attended by a lot of the grinders but also pilgrims from all over the world, we continued to play on the streets again. We may talk about a tradition when telling You that the lunch break was sponsored again by hotel "Drei Könige". After the lunch break the grinders spread out again throughout the city. The public interest was quite high this year and we had a lot of nice talks with interested people about the function and technique of the organs

Since this year there was a so-called "Völkerfest" at Paracelsus-Park (a meeting of different cultures from Africa, South Europe up to Britain), the presentation of all organs and their grinders was integrated in the fest.

Every organ grinder and the instrument he was playing was introduced by Peter Bürgisser and there were a lot of people around to listen. The synchronous play of the two Bacigalupo organs I mentioned the year before took place again, this time with 3 musical pieces on new barrels arranged and pinned by Martin Zumbach - an amazing listening experience again.

After the demonstration of the organs the grinders had their usual get-together at the nearby hotel before leaving for their hometowns.

Next year's festival will take place on 19th August 2018 - You´re invited to have a look at a wonderful town with a world-known monastery and a lot of organs again.

Check out Uwe's photos here or by clicking on the photo above.